Chiller – Our customer’s commercial air conditioning systems that use cool water distribution consist of two main components: the water-cooling station and the fan radiators. Typically, the water cooling station is a large machine installed in the basement of a shopping centre, office, or hotel. Cool water is piped throughout the building and fan radiators are installed in the ceiling of each individual room.

Typically, these large systems have been custom built according to a design. Our customer was interested in how he could improve the effectiveness of his company by moving to a more standardised manufacturing process.

The company achieved fast growth in both sales and profitability when the decision was made to revamp the whole production strategy to use a sales configurator. The concept was to move from a “fabrication” role to a “mass customisation” role. When working as a fabricator, each customer project was engineered and manufactured as a custom project. With “mass customisation” the subassemblies were standardised and could be produced in batches and either held in stock or manufactured to order on a standard basis.

This change was much more than just an ERP project for Chiller, but rather a major strategic change that involved both sales and manufacturing. The objective was to provide customers with exactly the product they required with a short lead time. By doing this, they could charge a significantly higher price than the competition, which was based on importing standardised products from the Far East.

The Chiller project involved two critical, integrated ERP developments: 3D CAD for the design together with a PDM (Product Document Management) and Manu Online. Customer specific designs can be created and costed for quoting in the PDM, and on sale, the order and design is pushed electronically to Manu Online for manufacturing and procurement. After sales services is based on the traceability and agreement features of Manu Online

Together with the key features of 3D CAD and configurator, a number of significant changes to the manufacturing process flows were made. The layout of the factory was changed to support a process flow type layout, where assembly could be made on a moving production line. Also, the component store was outsourced to a logistics contractor. Purchases that are planned and ordered by the ERP system are delivered to a logistics warehouse. From there, the parts relevant for each work order “called in” and picked for delivery to the assembly line in batches suitable for assembly. Smaller components are put into an automated paternoster storage system for collection against planned requirements, but stored in-factory.

This resulted in a lot of electronic messages. Integration of the ERP system into the other systems was achieved using Manu Online’s API services. The integration was built by an integration partner who managed the messaging hub. 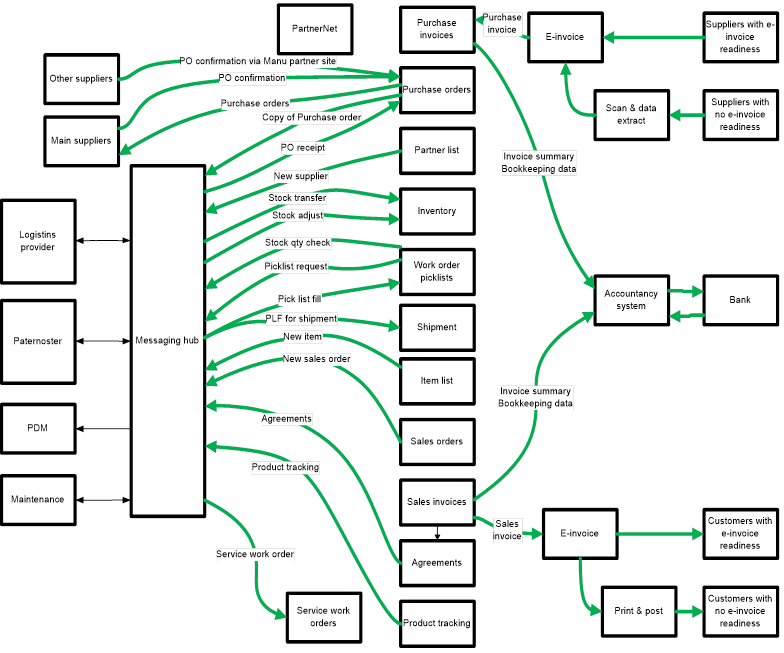 Serial numbers and after sales agreements

After the machine has left the factory, the work does not stop there. Each unit is serial numbered and records are kept of its service history. The ERP system is integrated into a service request ticketing system so that service work orders can be opened automatically for either warranty work or billable service.

How the ERP system helped

The advanced features of the ERP system were critical to this project. Included were sales configuration, real-time planning, integration using messaging, etc.

This project most clearly demonstrated how the usage of an ERP system needs to be considered against a company’s strategic position in the market. Over a number of years, this company turned from a low margin metals fabricator into a high margin mass customisation manufacturer, and from there into a full-service supplier where a growing share of revenue came from after sales service. At the same time, the company’s revenue and profit multiplied many times over.